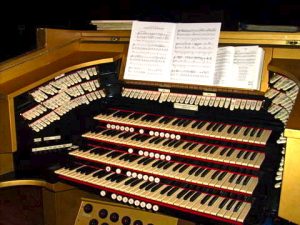 The John Compton Organ Company Ltd was invited to tender for the “supply and delivery of a suitable organ for the Civic Hall”. The Contract was signed on the 4th January 1937 for the total sum of £6000. This was guaranteed for 25 years, subject to a tuning contract being placed with Compton .

The whole of the organ is installed in two chambers suspended from the roof, totally enclosed behind five sets of shutters. Originally 40 ranks, there are now 44 ranks ~plus tonal and non-tonal percussions housed in the chambers. An electronic grand piano is also provided. Originally, a Melotone unit was installed and controlled from the Solo manual. This, however, was disconnected in about 1939. Compton said, “as a recital instrument, it is second to none in the Midlands and every part was made in our own factory. It is also suitable for light music”.

Nearly every organist appeared at the console throughout the next four decades, including ‘Mr Blackpool’, Reginald Dixon, Sidney Torch and Reginald Foort not forgetting many ‘Classical Giants’ including Thalben-Ball and Gillian Wier. The Organ was also broadcast regularly. This continued until the mid 1970s.
After the retirement of Arnold Richardson in 1972, and the change of public tastes, the organ was not used so often. It gradually became more unreliable, more things went wrong and it became quite difficult to play. This situation continued until the early 1990s, when Steve Tovey was approached by the management to see what could be done. At this point, he joined the Civic team as Borough Organist, his brief being to popularise the organ.

Being a theatre organist and theatre organ builder, the first thing that Steve did was to add a Tibia Clausa, Glockenspiel and Xylophone. He then set about finding the many faults in order to make the organ more reliable.
Regular theatre organ concerts were staged but the reliability of the organ became practically nil by 1999. It was therefore decided that the organ would be re-furbished as part of the total re-furbishment of the Civic and Wulfrun Halls.

A Krummet, Kinura and English Horn were added as well as a Conacher Wooden Tibia to replace the metal Compton one added in 1993. A new electronic relay and capture system was provided and the console was removed from its lofty perch at the top of the orchestral stage onto a movable platform.

After lengthy discussion with several local organists and theatre organists, a new specification has been drawn up, bringing the best of the theatrical and classical sides of the Compton together in a theatre organ layout, suitable for visiting theatre organists. The console formerly from the Empress Ballroom in Blackpool was purchased in late 2004 and will control all 44 ranks of the Compton . The need for a second console had been realised about 15 years ago when regular concerts were started again. Although the original console’s specification was altered to accommodate the new ranks and was partially successful, it was still difficult for guest organists to find their way around the instrument and get the sounds they wanted. The Krummet has recently been replaced by a Vox Humana, which the organ was lacking.

The Compton was re-opened at a dance in May 2001 by the City organist, Steve Tovey. Since then, the organ has been featured by some of the country’s leading theatre and classical organists in regular concerts as well as being featured as part of larger shows in the 3004 seat auditorium.

The original Blackpool Tower Wurlitzer’s Tibia Clausa and chest (Main Tibia on the Empress organ) have been purchased and added to the instrument along with its original tremulant.