It’s an organ in a cinema – or, at least, that’s how it got its name. Cinema (or theatre) organs originally made music for silent movies in the 1920s, but when the talkies came they took on the role of solo musical instruments. Cinema-goers would often find the music of the Mighty Wurlitzer (or Compton or Christie) as exciting as the movie and the theatre organists themselves became stars. Radio and records brought the same thrilling sounds to the home and the music of the theatre organ became part of everyday life. Theatre organs are real pipe organs, but they’re much more versatile than church organs. Robert Hope-Jones, the organ builder who set the ball rolling at the turn of the century, called them ‘Unit Orchestras’, instruments that really can cope with everything from classics to big band. The rich, spine-tingling sound of a mighty theatre organ is something you’ll never forget 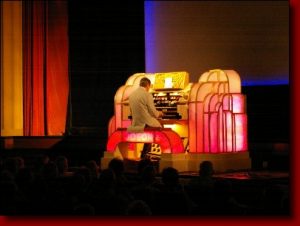 Where are they today?

Most cinemas sold their organs when buildings were being multiplexed or closed. Only a handful of organs remain in cinemas in Britain. The rest have found their way into town halls, clubs, churches, schools, museums, places of commercial entertainments and private homes. But, wherever these theatre organs are to be found, there’s wonderful music to be heard. The Cinema Organ Society has three of its own and is involved in the care of others, too.

Technical information about these instruments can be found on our Theatre Organ Fact Finder site.