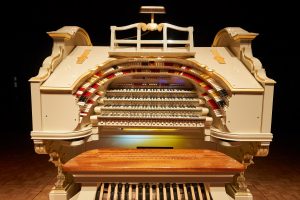 This is the largest Wurlitzer ever imported to Europe from the United States in 1930, it was originally installed the Trocadero Cinema, Elephant and Castle in South London. It is rated as one of the finest in the world.

The large four manual console can be moved to any suitable performance position in the lower Grand Hall.

The installation of this organ in the magnificent Troxy is a unique opportunity, enabling audiences to hear once again the exciting sounds of a Wurlitzer pipe organ played in a large super cinema environment.

Located on each side of the proscenium arch behind the ornamental grilles, four organ chambers house the 1,777 pipes, which range in size from 16 feet to 1 inch, together with effects including drums, cymbals, xylophone, glockenspiel, marimba and piano, all of which are the real thing!

The Southern District aim to present major musical events to a contemporary audience featuring the Wurlitzer for solo performances, silent film presentations, combined shows with soloists, bands and orchestras. We will also offer the use of the Wurlitzer to external event hirers of the Troxy.

Further details about the Wurlitzer and its history can be found on The Troxy Wurlitzer website.