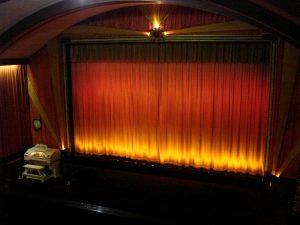 The organ was originally installed in the Almira Theatre, Cleveland, Ohio in 1927, however it was removed in 1934 and shipped to England to be installed in the new Rex Cinema, Stratford, East London, being opened by Sandy Macpherson on the 15th September. The organ enjoyed mixed fortunes at the Rex.

The introduction of a panoramic screen in the early 1950’s rendered the console inaccessible and the organ was not heard again until the late 60’s when conversion to bingo allowed the removal of the screen. Following a period of intensive renovation the organ could be regularly heard prior to bingo through the 1970’s and it was during this period that David Shepherd made the ever popular Stratford Sound recordings on the instrument. Later in that decade the building was closed for conversion into a night club and the organ was rescued by Charles Davidson and added to his collection of instruments. Sadly, no suitable home was found for the organ and it remained in storage until it was acquired by the Furness Theatre Organ Project early in 2007.

Following a period of fundraising and restoration work, which included the complete re-leathering of all the chests etc, the organ was installed in the Royalty Cinema, Bowness-on-Windermere in the heart of the Lake District and was officially opened by Chris Powell, David Ivory and David Shepherd at a Gala Concert on October 6th 2012. The instrument is divided into two chambers situated under the stage and speaks through grilles into the front stalls with the console placed to the left of the stage. When funds allow a lift to take the console from the floor to stage level will be installed.The auditorium seats 380 people and the organ seems to fit in very well both aesthetically and acoustically.