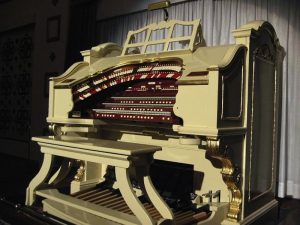 The North East Theatre Organ Association was founded by enthusiasts in 1968 in order “to preserve and operate a theatre organ in the North-East of England for the education, entertainment and general benefit of Association members and the general public”.

The Association purchased the 3-manual 10 rank Wurlitzer theatre pipe organ from the New Victoria Cinema in Bradford.  It had been installed there in 1930 and entertained cinema-goers for almost 40 years before becoming surplus to requirements in the 1960s. Association acquired, with the aid of an interest free loan from Wear Valley District Council, the (disused) Trinity Methodist Chapel in High Street, Howden-le-Wear, Co. Durham.

They stripped out the wooden pews, pulpit and church organ ~and fitted out the building as a 1930s cinema, complete with the organ on a lift and cinema seats from redundant local cinemas at Esh Winning and Spennymoor.  Authentic lights and signs were fitted and spotlights and other effects help re-create the atmosphere of a bygone era.  Since opening in 1986, the organ at the New Victoria Centre has been played at concerts by some of the finest theatre organists in the world. It became apparent in 2003 that the organ, after 75 years service, was in need of a major overhaul.

An application to the Heritage Lottery Fund for a contribution towards the costs needed to repair, renovate and enlarge the organ to 19 ranks (estimated at £130,000) was successful and the North East Theatre Organ Association were awarded a “Your Heritage” grant of £49,800.

The NETOA gratefully acknowledge the help of the Lottery Fund staff based at their Newcastle regional office.  Work started on the project in January 2005 when the organ was dismantled and sent to various parts of the country for repairs and renovations, whilst other items were kept on the premises and refurbished by the Association’s own technical team.  The reopening concert featuring Simon Gledhill, Richard Hills and Joe Marsh took place eighteen months later in June 2006.