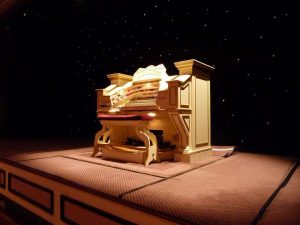 This organ has quite a history,having been originally installed in the United Artists Theatre in Los Angeles, California, USA. In the late 1950’s it was bought and removed by well the known organist Buddy Cole who installed it in a studio in his home, where he made a number of definitive recordings on it. An additional nine ranks were added at this time from Cole’s former studio Robert Morton organ. During the early 1970’s the organ was bought by the ‘Captain’s Galley’ pizza parlour chain and was installed in their restaurant in Campbell, California, USA.

In 1987 the Wurlitzer was purchased and shipped over to the UK by the National Motorcycle Museum and installed in the new luxurious Imperial Suite, the largest of the Museum’s various conference suites.

The Wurlitzer was completely overhauled and refurbished, the console rebuilt and a grand piano added, although this was later changed to an electronic MIDI piano sound module. (The grand piano is now attached to the Compton at Penistone Paramount.)

The organ was played regularly by Keith Tomlin, accompanied by John Barnett on Yamaha HX 1 electronic organ, for the very popular Party Nights up until the end of 1998. Two albums were recorded on the Wurlitzer -‘Wurlitzer Wonderland’ Volumes 1 & 2.

Since this time the instrument has seen little use. However, it is reported to be in good condition and was featured by organist Simon Gledhill at a special dinner concert presented by the COS Midlands & Wales District in May 2009.