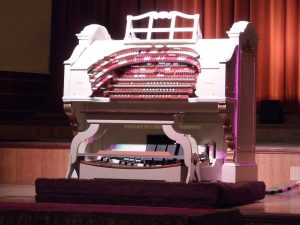 The Worthing Wurlitzer began its life in the Troxy Theatre, Stepney, where it opened in 1933 with Bobby Pagan as the organist.

It spent some time at Buckingham Town Hall, from where the organ was acquired in a very poor state of repair by the Sussex Theatre Organ Trust in 1977. Four years of painstaking work and significant investment followed, before the Wurlitzer was first heard in the Assembly Hall on the 24th May 1981. The opening concert was given by George Blackmore, Ernest Broadbent and, opening the same instrument for the second time in his career, Bobby Pagan.~

In 1988 the BBC Playhouse (ex. Empress Ballroom Wurlitzer) was acquired and the process of enlarging the Worthing instrument began. Other ranks were also purchased, including a Horn Diapason, Clarinet and the ‘Style D’ Trumpet from the original George Wright studio organ.

International experts such as Lyn Larsen, Walt Strony, Ron Rhode, Hector Olivera and Simon Gledhill all contributed to the revised specification and console layout. So significant were the console modifications that a completely new stop rail had to be a constructed, using electric stop key actions and 264 stop keys. The design, based on the ‘Fox Special Wurlitzers’ took two years and some £8,000 to complete.

The new 22 rank organ reopened on the 23rd February 1997 with Nigel Ogden, Iain Flitcroft, Robin Richmond and Simon Gledhill at the console. The organ is used for a full range of functions from regular monthly concerts to ballroom dancing and civic functions.