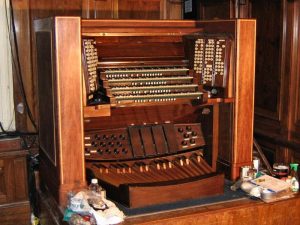 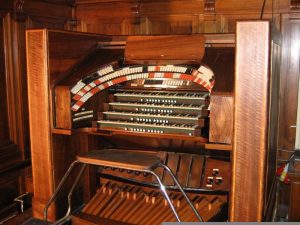 Dual-purpose instrument with 2 four manual consoles: one with concert-organ layout and the other in theatre-organ style, both controlling the same instrument.

The Guildhall Southampton was opened on February 13th 1937 by the Earl of Derby and there was an organ recital at twelve noon performed by Dr George Thalben-Ball who, as organ consultant, had recommended a dual purpose, twin console organ to be built by the John Compton Organ Co. The public however had to wait until the following day to hear the magnificent Compton organ in the hands of D. Cecil Williams FRCO, head of music at Southampton University. He remained as official organist for the next two years, but Arthur Williams was engaged as variety organist in addition to his post at the Forum cinema across the road, a position that was continued by Reginald Porter-Brown upon his arrival at the Forum later that year and upon transfer to the Regal after the Forum was damaged by bombing during WWII.

Reginald Porter-Brown continued his association with the Compton throughout the 1960s and 70s playing programmes of Light Music during the summer months and broadcasting regularly on the Light Programme and later BBC Radio 2. He was also featured from the Guildhall on ‘The Organist Entertains’.

The exact size of the organ is open to debate, but it is likely that the Theatre Console controls around 25 ranks plus a Melotone and all percussion and effects usually found on a cinema organ. The Concert console is thought to control 50 units (71 ranks) plus the Melotone. The total is considered to be 72 ranks, the Tibia not being playable from the Concert console. There are just over 5,500 pipes in all

During the 1980s Richard Smithers, better known as the cinema organist Tony Fenton, went from Chief Technician to City Organist keeping the Compton in playable condition.

Since his departure there has been no official organist at the Guildhall, but the organ continues to be used for a series of concerts and it is certainly an experience to be seated in the huge main hall and hear the superb sounds of the Compton organ in the fabulous acoustic.