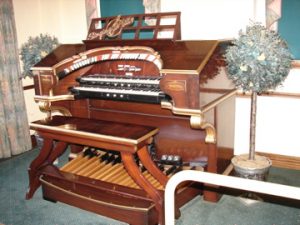 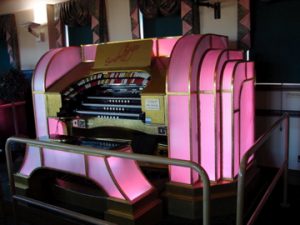 In 1992 a new golfcourse was created at Albourne out on the beautiful South Downs, just off the A23 near Brighton. It was decided to build the large clubhouse, ‘The Pavilion’, around a Wurlitzer Pipe Organ. What better idea than to make the 215 Opus 1840 the foundation of a much larger Wurlitzer… and call the golf course ‘Singing Hills’ to honour the new theatre organ to be installed in the custom built venue.

It was decided at the outset to keep the 2/5 in its original form, the 2 manual console playing its own five ranks. A 3 manual console was obtained which would play those 5 ranks plus another 14 ranks, making a total of 19 different ranks. In 1992, the building of the Singing Hills Pavilion and the Wurlitzer commenced. The organ has since been enlarged to 23 ranks.

An illuminated surround was found (from the Regal, Old Kent Road) together with its mechanical dimmer and illuminated bench, a lift (from the Ritz, Barrow-in-Furness), three Christie keyboards (from the Castle Cinema, Merthyr Tydfil) and all the pipes and chests for the extra 14 ranks were brought over from America. With all the components being nearly 70 years old, everything had to be renovated and rebuilt.

The arrangement of the consoles at Singing Hills is rather unique as the 2 manual organ is mounted on a platform which moves sideways to reveal a pit containing the 3 manual console which rises on its lift to sit along side the ‘little’ Wurlitzer.

The organ was officially opened by the legendary Phil Kelsall who brought the sounds of Blackpool’s Tower Ballroom to Brighton. The electric atmosphere of the concert enthralled the capacity audience, including many Kelsall fans who had travelled huge distances to be there. An engraved brass plaque on the organ commemorates the event for all time.