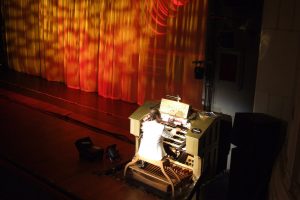 The John Compton Organ Company were given the contract to build a concert organ able to play the most complex pieces of classical music to the latest ‘pop’ music of the day. John Compton had already had some success with his installations in major concert halls and churches throughout England. Two concrete chambers both 48 feet high were constructed either side of the proscenium arch to house the 1852 metal pipes, stacked on various levels in the chamber. At the top, a system of horizontal wooden shutters controls the volume of sound that bounces off the dome into the auditorium below. A teak four manual console was placed on a small fixed platform at stalls level just under the right hand chamber.

A grand opening of the Concert Hall and the Compton Organ took place on 11th November 1929 in the presence of the Duke of Gloucester, Mayor and full Council.

Philip Dore was not entirely at ease with this complex instrument and after two years handed over to Percy Whitlock who jumped at the chance of becoming Civic Organist where he remained until his untimely death of a stroke in 1946 at the age of 42. Whitlock composed much church music during his time in Bournemouth and this has become more popular in the last few years. The Percy Whitlock Trust now promotes his music and have reprinted most of his remaining manuscripts in recent years.

Harold Coombs took over as Civic Organist in 1946 and remained until his death in 1962. Harold did many live broadcasts on the BBC Light programme and the remains of the original dome microphones and BBC broadcast room are still in situ. After that time no permanent Civic Organist was appointed. The Pianist Reginald Hamilton White from the Pavilion Ballroom Band took over as part time organist and continued to play up until his retirement in 1978.

By this time the Organ was in a very poor state of repair and a small team of volunteers took over the maintenance of the Compton. Since then, and with the help of the Bournemouth Council, National Lottery and public donations, many maintenance projects have been completed. Every one of the 22 Ranks of pipes are working. Both chambers have been cleaned and painted and modern lighting and communication have been fitted. The organ retains the original Compton action and cotton covered wiring.

The weekly lunchtime concerts through most of the year provide a wide range of Light and Classical music from many of the UK’s top artists.