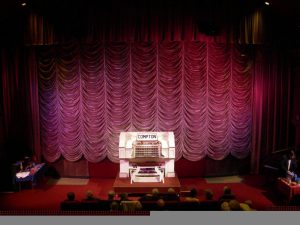 Originally built by the John Compton Organ Co. in 1937, and installed in Birmingham’s Paramount theatre, this monument to the craftsmen of the Art Deco era has had a chequered history.

For almost thirty years it thrilled and entertained audiences in the hands of such organists as Al Bollington, Charles Saxby and Gerald Shaw.

Between 1965 and about 1969/70 the organ lay disused in the theatre until it was bought back into use and concerts were held there right up to 1988 when it was bought by a private cinema owner and installed into the Regal cinema, Oswestry.

After a short and unsuccessful period there it was bought by Blackpool organist Kevin Grunill who, along with a team of helpers, installed it in the Penistone Paramount cinema where it now has a successful home.