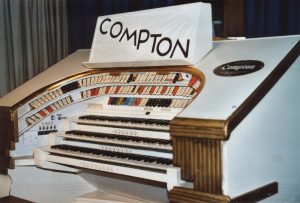 The Windsor Compton was originally installed in the Regal Cinema, Old Kent Road, London where it was opened in January 1937. Its original ranks were Diapason, Open Flute, String, Tibia, Tuba and Trumpet, to which were added a String Celeste, Vox Humana and Marimba from the Gaumont, Chadwell Heath and a Stopped Flute, Clarinet and Oboe from the Ritz, Bowes Park, making a total of 11 ranks. The piano came from the Astoria, Finsbury Park. Sadly, the Melotone was unserviceable and was transferred to the Brentford Piano Museum for spare parts. Another loss was the illuminated surround: as there was insufficient space for it at Windsor, it has been used at Singing Hills.

The Windsor opening was in January 1969 with Jackie Brown and Vic Hammett and, as well as being used for 4 concerts each year, it is also used for many of the Hall’s other activities in a supporting role.