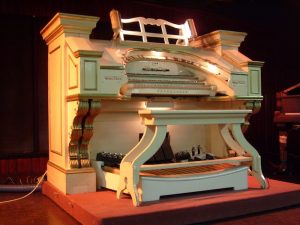 The Tywyn Wurlitzer was originally installed in the Granada theatre, Woolwich, London, and was opened there on April 20th, 1937 by Reginald Dixon. The theatre was second only to Tooting Granada in style, being a scaled down version. Lloyd Thomas gave the organ its first BBC airing the following August.

Visited by the famous broadcasting Granada team of organists over the next 20 or so years, the Granada finally succumbed to Bingo and by 1971 the organ console had been disconnected and stored backstage.
The organ was eventually sold and removed to Carlisle (before the Granada was listed in 1974), where part of it was used to enlarge another Wurlitzer, the remainder being put into store.

The organ was rescued by the then COS General Secretary, John Smallwood in 1991 and installed in Neuadd Pendre, the local community hall in Tywyn, Gwynedd at the beginning of 1996. John generously arranged its permanent loan to the people of the town through the Tywyn Town Council.

Since the original installation was completed an 8ft Orchestral Oboe has been added, utilising existing stop-keys so as not to alter the console in any way.