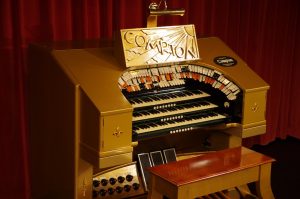 The Compton organ (numbered A320) was originally installed in the Tower Cinema, West Bromwich, which opened on 9th December 1935 with Leslie Taff at the 3 manual illuminated console. The ten units were: Tibia, Tuba, Muted Trumpet, Clarinet, Vox Humana, Diapason, Flute, Violin, Violin Celeste, Cello and a Melotone unit. The organ was sold in 1965 to a private buyer who installed it in his home, but he unfortunately died suddenly. His widow sold the organ to the COS in 1967 and it was installed at Marston Green Maternity Hospital. The opening took place on April 4 1971 with COS founder and President, Hubert Selby, and regular concerts were held by visiting organists, including Leslie Taff who had opened it in the cinema. This happy state continued until 1985 when it was decided the space was needed for a health centre, so the organ had to go.

In 1989 an agreement was signed with the Governors of St Martin’s School, Solihull and in 1992 the Compton was once again playing with the addition of a large scale Trumpet from the Gaumont Bromley. To avoid confusion, the stop-keys for the original Muted Trumpet, still retained on the organ, have been re-labelled Orchestral Oboe, as was often Compton practice.

Once again, space being an expensive commodity, the school governors reluctantly announced that they could no longer accommodate the organ and so in 2002, once again, the Compton was ‘on the move’. The search for a venue with long-term commitment ended with the signing of an agreement in January 2002 with the George Fentham Trust.

The organ is now installed in Fentham Hall, which provides ideal acoustics and comfortable accommodation for both the organ and the audiences. It is set in the relaxed and delightful surroundings of Hampton-in-Arden, only a few miles from Solihull and also has easy access and ample parking. The hall is now actively used for a wide variety of functions and is foremost in the social and leisure activities of the local community.