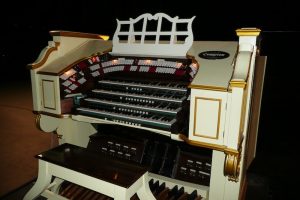 Designed by Robert Cromie and originally intended to be the Davis Theatre, the 3560-seat Gaumont Palace opened on Easter Monday, March 28, 1932. Leslie James was at the organ on opening night, and he was followed as first resident by Stanley Tudor who remained until October 1935. Successive resident organists included Miles Wilde, John Madin, Leslie Simpson, Terrance Casey and Andrew Fenner with the last, from April to September 1947, being Robin Richmond.~

The Theatre became an Odeon in 1963 and a series of concerts were held throughout the 1970s and early 1980s, the last being in 1982 after the orchestra pit had been covered over and a box constructed around the console to enable it to be raised. However, this arrangement had to be strengthened and made permanent for safety reasons, thereby entombing the console.

In 2007 the firm of HWS Associates were awarded the contract to restore the organ and, most importantly, re-connect the console to the chambers as the main cable had been severed at some time in the past. This work was completed in July, 2007. At the same time a new lift was installed to enable the console to be brought up to stage level for the first time in decades. Since this work was completed the organ has been featured a number of times in public and recently appeared on comedian Dara O’Briain’s 2010 DVD ‘This is the Show’ with Richard Hills at the console.