Wurlitzer (Opus 95
Originally installed in the The Picture House, Walsall in 1924
2 Manuals
6 Ranks 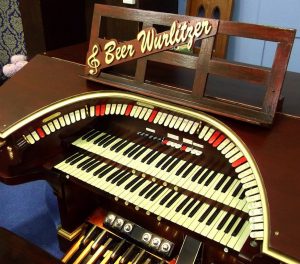 The church contains the oldest surviving Wurlitzer theatre organ in the UK.

In 1924 the organ was the first Wurlitzer Unit Orchestra to arrive in England and was originally installed in the Picture House in Walsall. After 30 years in the cinema, it was bought privately and in 1955 it was transplanted into Dormston House in Sedgley.

Spending only two years there, the organ was removed and re-installed in the church at Beer, but minus its percussion, second touch and special effects. The organ was regularly used for church services but, by 1987 the organ had fallen into a state of disrepair and in 1998 the church were considering selling the instrument. However, a local organ builder was contracted to maintain the organ.

In 2008 it was decided to increase the public profile of the instrument and to raise some much needed funding to help restore the organ to its former glory and so the society, ‘Friends of Beer Wurlitzer’ was formed. Since then the missing percussion items have been replaced and the organ now entertains the public on a monthly basis as well as being used for church services.