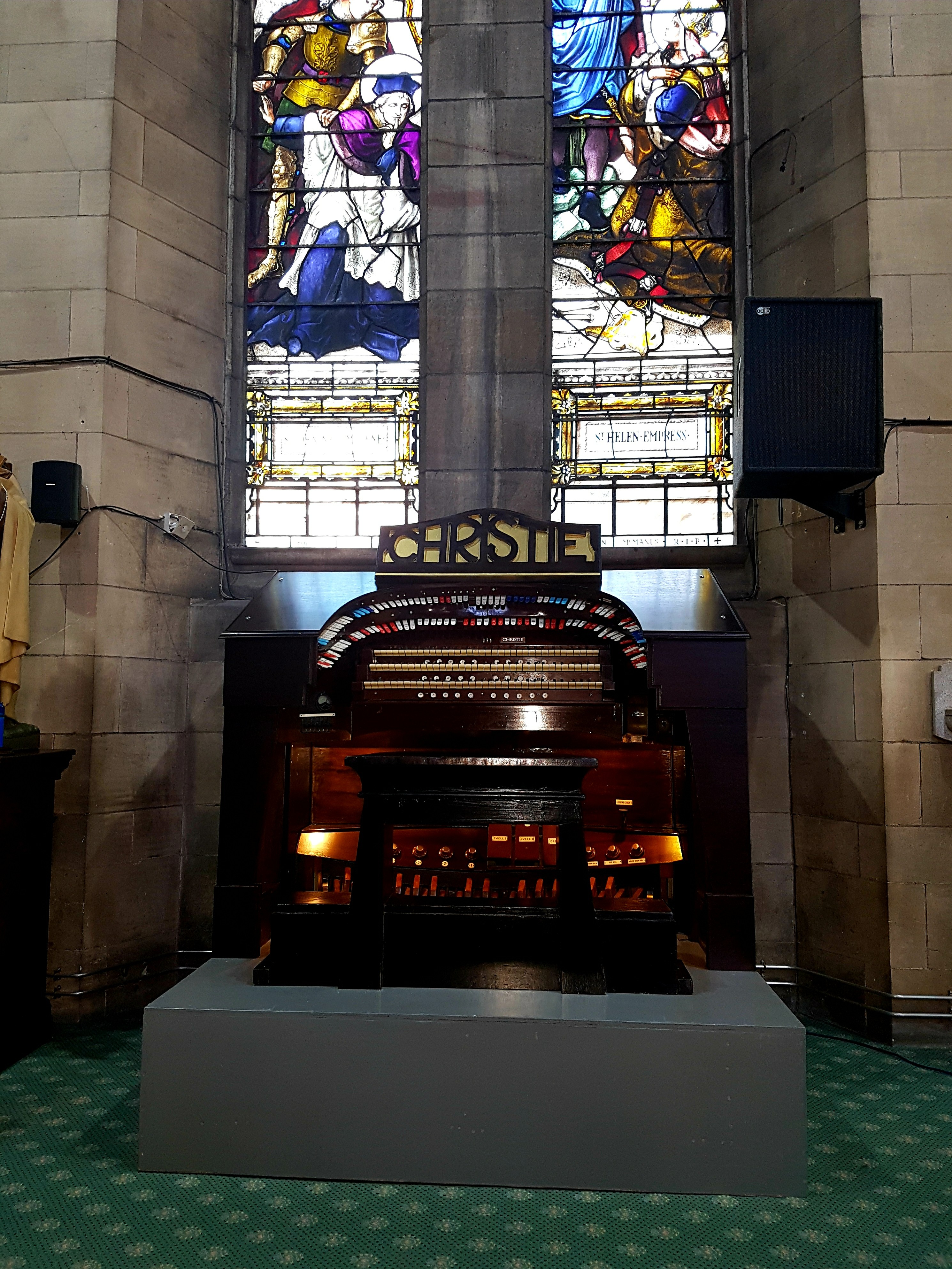 The Christie organ manufactured by the Hill, Norman and Beard Company was originally installed in the Pyramid Cinema in Sale, Cheshire. The 2,000 seat building was designed by Manchester architects Drury and Gomersall for the John Buckley Circuit, in the Neo-Egyptian style, incorporated a twin console organ where the more decorative stage console complemented the auditorium décor with fine Egyptian carvings. The pipe ranks were contained within large chambers underneath the stage. The Christie was made famous by Reginald Liversidge who lived in a house within the car park of the Pyramid. Subsequently, the cinema became part of the Anglo Scottish Theatres, and later was incorporated into the Odeon circuit.

When Odeon sold a number of cinemas in 1981, it was leased by the Tatton Group, but closed just three years later. In more recent years the grade 2 listed building has been sympathetically converted into a large leisure club, although the large foyer and café areas are to-date unused. The Christie organ was purchased by the LTOT in the early 1980’s and after refurbishment by the trust’s technical team was reopened in the Blue Coat School Oldham where it entertained audiences until 2008. Upon removal, the organ was placed in storage until the instrument was provided to St Mary’s Lowe House together with a grant to assist with refurbishment and installation of the historic Christie.

St Mary’s is a very large and impressive building, built close to St Helens Town centre in 1929. It is often referred to as St Helens’ Bassilica or the Poor man’s Catherdal, due to its size and status in the town. The Church housed the second largest Carillon in Britain, consisting of 47 Bells ranging in size from 14lbs to 4.5 tons. The bells are different to the type of bells found in most churches, as instead of being rung by means of ropes, they are played as one musical instrument from a large clavier (Keyboard), which is operated by striking batons with the hands and also a pedal board. 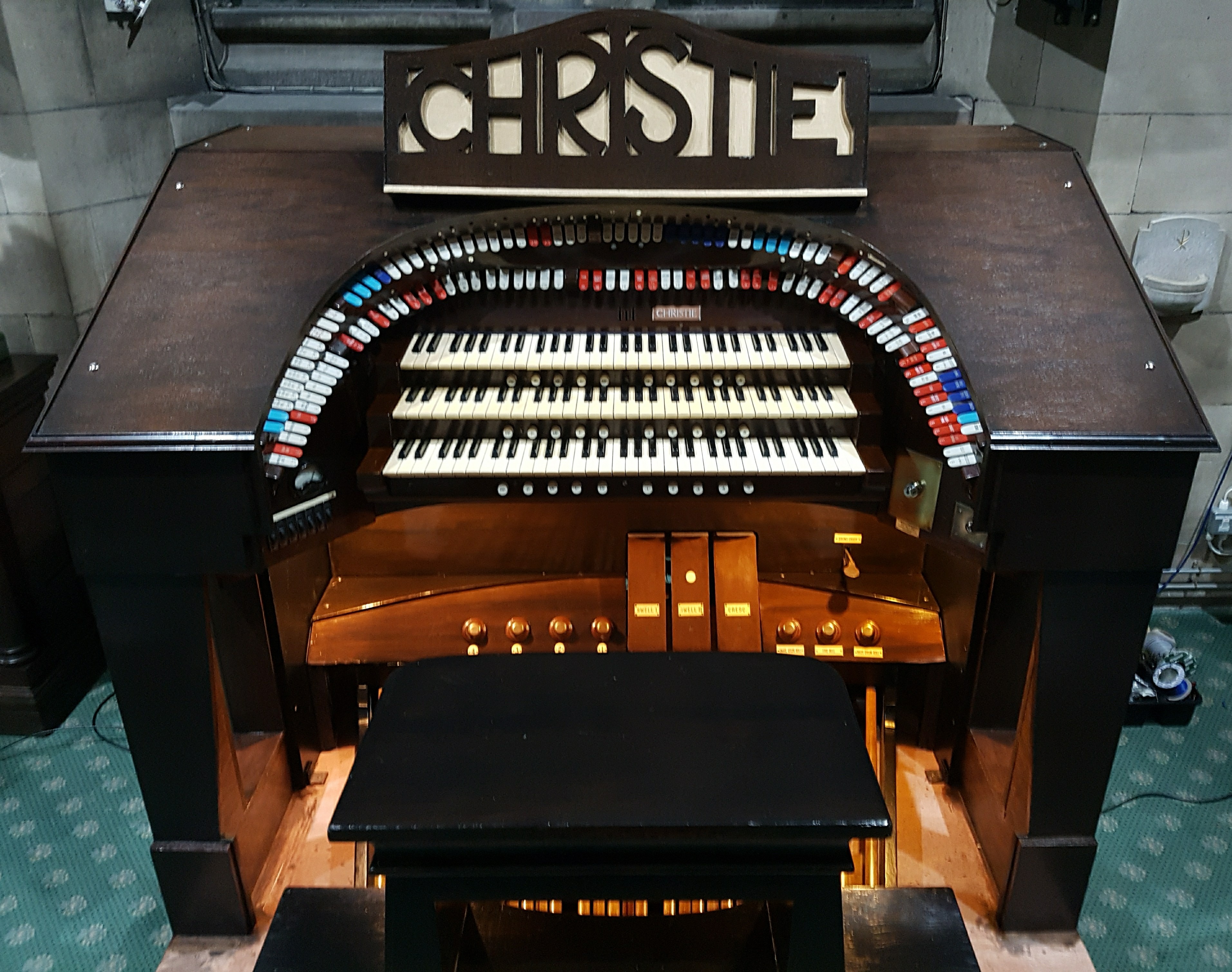 Although no expense was spared with regard to the building of the church or its bells, when it came to its organ, things weren’t so lavish! Originally a Tracker instrument that was in the previous church building, built on the same site, which was transplanted into the new church. This was replaced in 1958 by a small unit organ made by JW Walker & Sons. This was never big enough for the building, and following water ingress and poor maintenance, by the early 2000’s was getting unreliable.

The installation of the restored Christie Organ has been considerably complemented by the superb acoustics of the venue. All three manuals on both consoles are now fully unified and 3 extra ranks have been added. Clarinet from the Electric, Bournemouth Christie, a French Trumpet from the Lido, Bolton Christie and a Cor Anglais that was from a straight Norman and Beard organ. This last rank has been opened up and now works on 10″ of wind like the majority of the other pipework. For the technically minded, the only ranks on 6″ of wind are the Clarinet and Vox Humana. The Christie was originally 7 Units, (8 Ranks) and is now 10 Units, (11 Ranks). All percussions and traps have been retained and are playable from the downstairs console.