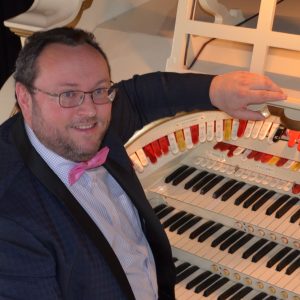 Michael Carter is an organist from the West Midlands, near Solihull. He plays both electronic and theatre organ and also combines these genres in cross-over events.

During his concerts you will hear a mix of theatre organ standards, orchestral arrangements, light classical items, film music and showtunes, as well as some popular tunes and diverse musical interpretations. Michael also likes to find music that you may not have heard played on the organ before.

Michael started learning to play following a visit to Blackpool Tower, aged nine. Michael was mesmerised by the sound and remembers deciding there and then that he wanted to play that instrument. Within a few years of hard work, and with tutorage from Midlands Cinema Organist, Foley Bates, he returned to the Tower and achieved his ambition to play the famous instrument.

Throughout his teenage years he worked weekends and school holidays in local music shops and continued with his lessons in theatre style whilst developing his own approach on electronic. During this period he shared concerts with his tutor and was notably 1/3 of the Midlands Trio, entertaining at the Cinema Organ Society Midlands, year after year, alongside Foley and Stan Smith.

After a 20-year musical hiatus to focus on his career in IT, Michael returned to music semi-professionally in 2016. He quickly acquired a number of instruments, a Yamaha HX1 and then an EL900m with which to return to the concert circuit – since then, he changed this concert instrument to a Yamaha D-Deck for a couple of years and has most recently acquired a Yamaha Stagea ELC-02 which will be used for all future electronic concerts.

With a full-time career as an IT professional, Michael is only able to accept a limited number of engagements each year. Please do get in touch early, if possible, to help with diary planning.

In his spare time, Michael is the editor for ‘Cinema Organ’; the quarterly journal of the Cinema Organ Society, taking over the role from John Leeming. He is also working on a Virtual Theatre Pipe Organ project based around a 2-manual Wurlitzer console from opus 1265 (ex-New Victoria, Edinburgh).

2021/22- Please think of those that rely on our musical world for their income before booking me in 2021/22. Whilst I’d always be pleased to be invited to play, there are others that are currently not getting the usual income from music and I believe it’s only right to give those artists first chance of any concerts that resume in 2021/22. I will still be here the year after and just as delighted to play for you.