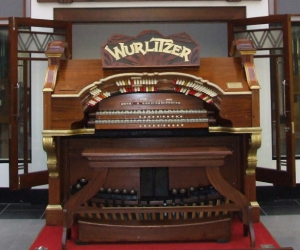 The Wurlitzer installed in the Villa Marina Arcade is an outstanding and rare example of its type – A Mighty Wurlitzer. It is a sister instrument to the one originally installed in the famous Tower Ballroom, Blackpool for the legendary organist Reginald Dixon.

A Brief History of the Isle of Man Wurlitzer

The Wurlitzer was built in Tonawanda, USA and signed out of the factory on 25th November 1929. Described as a Style 200 Special, it was given the opus number 2081.

Originally destined for the Marlborough Cinema in Holloway, London, on arrival in the UK it was thought that it was too small. So was instead installed in the smaller City Cinema in Leicester, where it remained until 1957.

Bought for private use by Councillor Allan Hickling, it was installed into underground rooms in the garden of ‘Dormston House’ Sedgley, where it became well known after being played on BBC Radio 2 programme “The Organist Entertains” by an organist called Brian Sharp.

Acquired by the Isle of Man Government in 1989, it became popular entertainment for tourists at Summerland until its closure in 2004.

The Wurlitzer has now been fully restored by renowned organist, Len Rawle and is the focal point of the newly refurbished Villa Marina Arcade.

For more information about the Isle of Man Wurlitzer, contact: