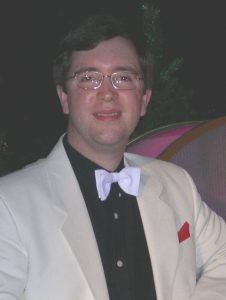 Stephen was born in 1972. Like many other younger organists of today, he started playing the organ at the age of 7. This was after first going to hear and being inspired by a youthful Phil Kelsall at the Wurlitzer of Blackpool Tower Ballroom.
While studying music with the Associated Board of the Royal Schools of Music, he passed Grade 8 at the age of 15. He subsequently went on to achieve his diploma from the London College of Music.
At work, Stephen is office manager for a Chartered Accountancy. He is a Fellow of the Association of Accounting Technicians and a Member of the Association of Chartered Certified Accountants.

His first contact with the Cinema Organ came in around 1988, in the form of tuition on the Wurlitzer which was, until 2001, located in the Silver Jubilee Club, West Hallam, Derbyshire. Stephen followed at this venue in the footsteps of other famous names including Nicholas Martin and Robert Wolfe. Since his friend David Thorp obtained a Compton for his ‘Pipes in the Peaks’ project they have worked closely on its re-specification and the visual aspects of the venue in David’s Garage at Ashbourne.

Both Stephen and his brother Paul have been popular performers throughout the UK, with Stephen performing on the organ and Paul accompanying on a variety of Brass instruments, keyboards and vocals. Recently, both Stephen and Paul have written and arranged music for an Alpine Horn band in Switzerland. Paul is currently in charge of the music department at one of the country’s premier and exclusive boarding schools.