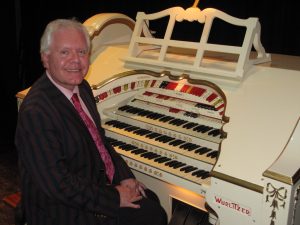 Stephen was born in 1952 in Taplow, Buckinghamshire and spent the next 21 years living around the home counties during which time he studied piano and classical organ in Essex (with Anne Jones, Alan Parry and Roy Wise) to Grade 8.  On leaving Shenfield High School 6th form, Stephen was offered a position at Hammond Organ UK in Edgware on the recommendation of Ena Baga whom he had come to know through local Hammond Organ Societies (and The Ideal Home Exhibitions!), Stephen was appointed as Assistant to Keith Beckingham and George Blackmore (The Musical Director) at a time when Ena Baga, Bryan Rodwell, Hubert Selby, Len Rawle and Stanley King were regular visitors to the office. He was then offered a job as demonstrator/salesman/in-house teacher at the famous Cavendish Organ Centre in London’s West End. This was eagerly accepted. During this period, Stephen was able to spend lunch hours at the New Gallery Wurlitzer and Saturday mornings were “lesson time” with John Stewart at the Gaumont State Theatre, Kilburn and also continue classical organ studies through the Royal College of Organists although he dare not tell his tutors about his theatre organ activities!!

In 1974, Stephen moved up to Blackpool to go into partnership with organist and photography expert John Nunns and together they opened “Camera & Organ Centre” selling a wide range of photographic equipment together with electronic organs and keyboards and also famously stocking a vast range of theatre organ LP records – much visited by theatre organ enthusiasts when in Blackpool. Together and with friends, they formed “Blackpool Keyboard Club” organ society which still meets every month – 40 years later!

Now completed at home in leafy Poulton-le-Fylde is a Hauptwerk Virtual Theatre Organ of 4 manuals and 50 ranks – housed in a splendid “cream” and gold horseshoe console with 230 stop tabs and 80 pistons.

Stephen is also quite busy on the concert scene and has appeared at various theatre organ venues including The Paramount Studios (Bolton), The Cannock Wurlitzer, The LTOT Heritage Centre at Peel Green, Stockport Town Hall, Ossett Town Hall, The Rex at Elland, Wolverhampton Civic Hall, Gosport, Blackpool’s Opera House, Saltaire, Harworth, The Royalty at Bowness as well as a host of electronic organ societies….and at Old Windsor and Fentham Hall in 2016