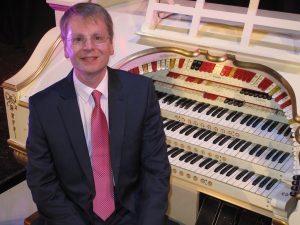 Simon was born in Halifax and showed a keen interest in music from an early age. He began learning to play the piano accordion when he was six and continued with that instrument for 11 years, winning several competitions along the way. When he was 10, his parents purchased a small electronic organ. After initially teaching himself to play it, he began formal studies with Michael Woodhead, who also gave him tuition in classical organ and piano.

Simon’s introduction to the theatre organ was hearing Ernest Broadbent play at the Tower Ballroom, Blackpool. In due course he began practicing regularly on the Compton organ at the 3Js Theatre Organ Centre in Gomersal, and in 1982, he won the Northern Young Theatre Organist of the Year competition, held at the same venue. Nigel Ogden, presenter of BBC Radio 2’s The Organist Entertains, was in the audience and invited Simon to record for the programme on the BBC theatre organ.

Around the same time, Simon became the first recipient of the Cinema Organ Society’s Ian Sutherland Award, presented periodically to a young player considered by the Society to demonstrate outstanding talent and potential. He has also been recognised by the American Theatre Organ Society, being named ATOS Organist of the Year in 1997 and inducted into the ATOS Hall of Fame in 2016.

Simon has performed at all the major theatre organ venues in Britain, as well as touring in Europe, the USA, Canada, Australia and New Zealand, and has made recordings on some of the world’s most famous theatre organs.

He combines his performing and recording activities with work for the Cinema Organ Society and a full-time career in finance, based in London.