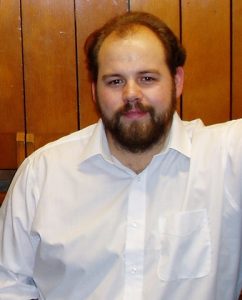 Robert has been listening to organ music since his days in the womb, most of which he cannot now remember, but his earliest memory of music is listening to a recording of the legendary George Wright playing at the equally legendary San Francisco Fox Theatre Wurlitzer. Robert’s interest in the theatre organ dwindled in his early school days, to be awoken in his High School years with a healthy interest in the classical organ to boot! With an engineering mind and love of music he was hooked, wanting to know how they worked and how to play.

Robert started playing at about 16 years old and is basically self taught, with a little guidance here and there. He gained much-needed experience and exposure to pipes when he joined the LTOT technical team at 18 years old, working on and playing the ex Gaumont Theatre Manchester Wurlitzer then installed in the Granada Studios complex in Manchester. Eventually he became one of the team of organists playing weekends to entertain the public.

Since then Robert has played at many UK theatre organ venues and some classical concerts too for good measure. He now studies classical organ with Rosemary Field when time permits.

Robert is one of the London based tuners for Harrison and Harrison Ltd Organ Builders, and enjoys a varied career tuning, voicing, restoring, and installing many of the countries most prestigious instruments. Robert is one of the few UK professional pipe organ technicians who has specific knowledge of the Theatre Organ, having worked on installations all across the UK.