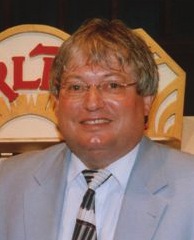 Peter graduated from the Northern School of Music in Manchester in 1972 and whilst studying there he played the organs in the Gaumont and Odeon Cinemas on Oxford Road under auspices of the newly formed Lancastrian Theatre Organ Trust, which led to concerts, recordings and broadcasting opportunities.
For almost 30 years Peter was resident organist at the Blackpool Cliffs Hotel.

His teaching career began in 1973 when, for four years he taught at Arnold School,  Blackpool, which he had formerly attended as a pupil. Since 1977 Peter has taught at Lytham Hall Park school where, apart from general teaching duties, he has been responsible for the music there and, in particular, choral training.
Peter has appeared many times on BBC Radio 2’s ‘The Organist Entertains’ as well as having conducted and played for religious programmes on Radio and TV. When he is able to find the time Peter enjoys writing songs.
He particularly welcomes the opportunity of meeting friends old and new at the various organ societies where he is invited to play.