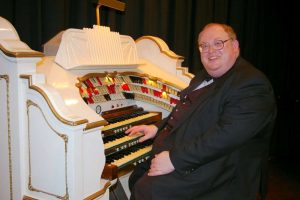 Kevin started with the piano at the tender age of three. When, as a choirboy, his voice broke, he was persuaded to try playing the organ instead of singing! All went well and he played for his first Choral Evensong in Salisbury Cathedral at the age of eleven by which time he was in his first term as a music scholar at secondary school. He took ‘O’ and ‘A’ Level Music (amongst others) and passed his Grade Eight Piano, Organ, Singing, Theory and General Musicianship examinations (winning prizes for the highest marks) along with a Performance Diploma at the piano before going up to University College, Durham as an Organ Scholar to read for a degree in music. During his years as a student, he studied the organ with Richard Lloyd and James Lancelot at Durham Cathedral and increased his musical experiences performing, accompanying and directing many diverse and varied musical activities. In 1986, he was appointed organist and choirmaster at Bolton Parish Church, a large cathedral-like building with a notable acoustic and a fine three-manual Hill organ, continuing to study part time on a consultation basis. He supplemented his income by teaching at Bolton School by day and working in clubs at night playing for dancing and backing singers.

At one venue in Bolton a regular member of the audience was Ronald Curtis, owner of the Paramount Organ Studio which housed the Compton Theatre Organs from the Paramount Liverpool and the Regal Gateshead.
After two or three visits to the club Kevin plucked up courage and went over to Ron saying that if he was awarding him marks out of ten for his efforts, perhaps he would be so good as to let him know! A great friendship and musical partnership followed. Ron allowed Kevin free access to his Compton organs which was a marvellous experience and one that Kevin is quick to recognise and acknowledge.

Kevin is a prize-winning Fellow of The Royal College of Organists, a Licentiate of The Royal Academy of Music and Trinity College of Music, London, in addition to holding Bachelors, Masters and Doctorate degrees.