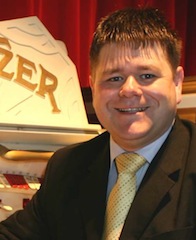 Kevin has rapidly built a reputation as one of the UK’s finest keyboard exponents. Such is the extent of his musicianship that he is equally at home on the modern electronic instruments as well as the more traditional theatre pipe organ and piano.

Kevin was born in Barnsley, South Yorkshire in 1972 and had shown an interest in all matters of a musical nature at an early age. However, it was not until the age of twelve that he began to learn the electronic organ as his chosen instrument. At the age of sixteen, Kevin began to take an interest in the sound of the mighty theatre organ and it was a natural musical progression that he should begin to study this type of instrument, for which he developed a different playing style from that of his electronic organ performances. It was not long after this that Kevin began performing concerts throughout the country, featuring both electronic and theatre organs. In addition to his concert appearances and providing music in strict tempo for ballroom dancing, Kevin decided to continue his musical education and studied at a performing arts college before furthering his skills at Leeds University where, in 1994, he graduated with a Bachelor of Arts (Hons.) degree in music. Since graduating from University, Kevin has performed at many venues in the UK, Holland & the USA.

A highlight in Kevin’s career came in 1997 when he was chosen to be the resident organist at the North Pier, Blackpool. In this prestigious position he entertained thousands of holiday-makers in a town that has a long tradition in presenting the very best in organ music. His duties in Blackpool also saw him at the console of the famous Wurlitzer organ in the Tower Ballroom, in addition to his performances at the North Pier.

In 1999, Kevin formed The Penistone Cinema Organ Trust and is heavily involved with the 4 manual Compton that once graced Birmingham’s Paramount/Odeon Cinema but is now installed in the Penistone Paramount theatre in South Yorkshire, where it is used on a regular basis for film and concert events.

Kevin has always had a keen interest in the technical side of the theatre pipe organ and has worked on numerous projects over the years. After leaving Blackpool in 2008, Kevin formed a new business – Pennine Organ Services, which carry out restoration & installation work, specialising solely on theatre pipe organs and is in demand as an independent consultant, restorer and installer. This work has seen Kevin’s involvement in numerous installations here in the UK, Holland and in the USA, where Kevin also restored and installed the former Paramount, Glasgow Compton – The only Compton theatre pipe organ in the USA.

In more recent years, Kevin has been instrumental in developing The Astoria Centre at Barnsley, which is home to a superb 3/18 Compton organ and is the location of the National Theatre Organ Heritage & Restoration Centre. Kevin has tutored a number of young organists at the Astoria Centre; two of them being Declan Poole & Lewis Scott, who both went on to win the ‘ATOS UK Young Theatre Organist of the Year’ competition in 2015 & 2016 respectively and are now artistes on the UK concert circuit.