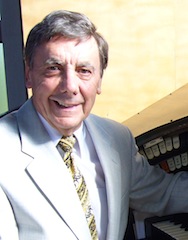 John Mann was born in Brighton and, after piano and church organ lessons, was engaged at Brighton Ice Rink to play for the skaters at the age of 17. John was also with Bobby Howell’s Band at Brighton Sports Stadium.
John met the well known cinema organist Peter Kilby who recommended him to Joseph Seal, then Musical Director of the ABC Cinemas circuit. John didn’t have to audition for Mr. Seal who thought highly enough of Peter Kilby’s judgment to engage John on the spot.

John toured ABC Cinemas with live shows throughout 1959, based at the Plaza Worthing. Summer seasons at Skegness and Ramsgate followed, after which John spent ten years at Queens Ice Rink in London. John is also a proficient ice skater himself, so knows what playing for skaters involves.

After ten years of that it must have been nice to return to Summer Seasons, which John did, dividing his time between Worthing, Eastbourne and Bexhill-on-Sea. The winter months were spent demonstrating for Eminent organs and on the concert circuit, where he was still much in demand to play the theatre organ and he also toured with his hilarious one man show.

In recent years John has cut back the touring but still plays at Worthing and Eastbourne during the summer with his Eminent organ and continues to delight theatre organ fans with his superb playing and cheeky brand of humour.

John has many recordings to his credit both on his Eminent organ and a variety of theatre pipe organs. He has broadcast from the Granada Tooting and been a popular and frequent contributor to BBC Radio 2’s ‘The Organist Entertains’.