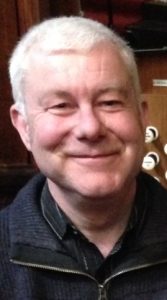 David was born in Bedfordshire in 1960, and started playing the piano at the age of nine, going on to pass Trinity and Associated Board exams. In 1975 he learnt Classical Organ from a local teacher and became interested in the theatre organ after a family holiday to Blackpool. In 1984 he had a chance visit to The Plough at Great Munden and joined their Organ Club, which lead to bookings at their weekend performances.

David joined the COS in 1984 after meeting Tony Moss at The Plough. He went on to serve as London District Secretary for a number of years and is a member of the COS General Committee.