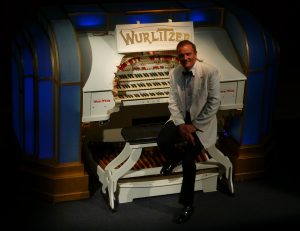 Chris was born and spent his childhood in Nottinghamshire where, at the age of six, he started to study piano with Mrs Alice Hopkins, LRAM, a great friend and disciple of Dame Fanny Waterman. Piano remained the sole keyboard study for Chris until he attained Grade 8 (Royal School of Music) at the age of 17, when he was offered the opportunity to study at the Royal College of Music and with Fanny Waterman herself.

At around this time, his interest in the organ was ignited and Chris spent the next few years studying classical organ with Dr. Nigel Kerry, the renowned Cambridge teacher and concert organist. However, his great love from an early age had been the theatre organ, possibly due to the  fact that both his father and grandfather were great fans of Reginald Dixon and so Chris had grown up with the sound of the Wurlitzer in the Tower Ballroom, Blackpool ringing in his ears. However, one of his earliest musical memories is being taken to a theatre organ concert at the Odeon Rotherham to hear the Conacher organ that was then in the cinema. Little did Chris imagine, as an 8 year old, that he would one day play the same instrument in concert and for live film presentations.

Chris’s theatre organ style really began to develop when he had the chance to study with Len Rawle MBE, and it was Len who introduced Chris to the Musical Museum and dubbed him the “Mr Romance” of the theatre organ, due to the romantic style of playing that has become Chris’s trademark. He has played at many of the leading theatre organ venues in the UK and has also played in the USA.

Chris has also worked as a session musician, and has played piano on cruise ships as well as in the cocktail lounges of various hotels. He has also spent time in the recording studio, where in this latter role, he arranged and recorded the backing orchestration for a Eurovision song contest entry.

Now based in West Sussex, Chris is currently the resident organist and Musical Director at the Musical Museum, Kew Bridge, London (www.musicalmuseum.co.uk) where he performs both public and private engagements on the world famous ex-Regal Cinema Kingston-upon-Thames 3 manual, 12 rank Wurlitzer, situated in its own purpose built concert hall. Chris regularly plays for tours, concerts, dances and silent films, in addition to the hectic schedule of Summertime and Christmas concerts which have become something of a tradition at the Museum.

Chris has recorded 2 CDs at the Museum “Music from the Movies” and “Espana” a celebration of Spanish music both of which have been regularly featured on BBC Radio 2’s The Organist Entertains.

Chris owns his own Mighty Wurlitzer (opus 1883) originally installed at Loews Theatre, Yonge Street, Toronto. As of 2017, the organ is currently undergoing extensive restoration, with the refurbished console shortly to be installed in a newly converted studio at his home.

Chris can be booked for concerts etc through the Musical Museum or via his website    www.romanticorganist.wordpress.com