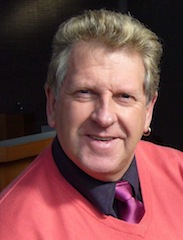 Byron was born in South Wales and was playing his Grandmother’s piano by the age of four. He had his first piano lesson at the age of six. While he was still at school he got a paper round to continue his pianolessons. When he left school his first job was as a trainee projectionist at the local Odeon Cinema. When the local Miners’ Club in Risca had a Hammond Organ installed he was taken under the wing of Rex Griffiths who installed the organ. Rex had just opened a shop in the Valleys at Blaina called Foxes of Doncaster. His father (who was a foreman in the pits) was only taking home about £30.00 per week, so £4.00 per night was an offer he couldn’t refuse. His next job required him to play modern and sequence dancing and this lead to bookings at dance schools all over South Wales. Then came a job at Merthyr Tydfil where he played for professional singers and cabaret acts who came straight from theatres such as the London Palladium.

Byron was invited to play at Barton Hall, Torquay and by then he was starting to break into the entertainment side of the organ scene. When he started at Barton Hall he was an unknown, but within a year he was starting to make a name for himself and then he formed the B.M.S. (Byron’s Music Society). For the last fifteen years he has hosted the B.M.S. at Malvern, where he used to play the Rushworth & Draper organ at the Priory.
Festival bookings started to grow and the late Roy Neal called to asked him to play for him at Caister. He billed him as the “The Welsh Wizard” and ever since Terry Ahearn has been organising him, it has been his registered trade mark.

Byron has now played all the major theatre and classical pipe organs in the country and he travels to the U.S.A. and Canada once a year to play some of their really big organ installations. His dream came true when he played the Blackpool Tower Wurlitzer and has since made a video on that very organ.