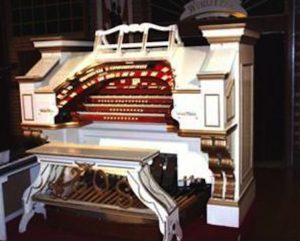 The nucleus of the Woking Wurlitzer was originally installed in the Granada Cinema, Welling in South East London and opened on the 22nd November 1937. It was Opus 2220 and, with its original three manual, eight rank specification, was one of six similar ‘Granada 2’ instruments installed in theatres in the London area. They were considered as standing head and shoulders above all other organs installed in neighbouring theatres. Sadly, all but one of these instruments have been removed from their original theatres and reinstalled in other venues.

When the Granada at Welling was closed the organ was purchased by the London and South of England Chapter of the American Theatre Organ Society and was removed by their technical team under the leadership of Les Rawle.

The organ was stored for a number of years before being installed in the hall at Woking Leisure Centre. Three chambers were built at one end of the hall, the centre one being of half height, so that a storage space for the console was formed under the floor. The centre chamber, which is shuttered, houses the Traps, Glockenspiel and Xylophone and it also accommodated the Wurlitzer relays. The pipe chambers either side are at floor level with a glass window in each so that the pipes can be seen by the public attending the concerts. The opening concert in the Woking Leisure Centre took place in August 1995.

Between then and the summer of 1998 an extra chest was installed in each chamber in order that the number of ranks could be increased to 17. These extra ranks of pipes were slowly added and indeed some were connected up to play using the surplus piano stops already in existence on the then single stop rail. By the beginning of 1998 the console had been altered to make space for the second stop rail which was still under construction. Since the size of the organ was to be doubled this would mean an extra set of Wurlitzer relays would have to be found to control the extra ranks. While this might have been possible, the problem of where to site them remained, as very little space was available in the small centre chamber where the existing relays were housed. At this point it was decided to install for the whole organ an electronic relay system designed and produced by Bill Walker and at the same time to add an electronic piston setter with 64 memories. The electronic relay is simply a digital multiplex system and is not a computer, therefore eliminating the problems of system crashes suffered by some microprocessor driven organs. Having an electronic relay system means that the electronics in the organ are connected to the electronics in the organ chambers by a cable containing 36 wires, of which only 28 are actually used. It also means that things like Sostenuto and Pizzicato are easily achieved. The addition of a MIDI module and MIDI stops on all manuals including the pedals gives the ability to plug in and play any MIDI-capable instrument, like an electronic piano, from anywhere on the console.

In early 2003 a Quintadena rank was added and then in 2004 a Clarinet and Kinura were added making a total of 19 ranks in all. The Wurlitzer attracts more people into the hall (now renamed ‘Wurlitzer Hall’) than any other activity; thus with regular well-supported concerts each year, the future of the organ is assured.