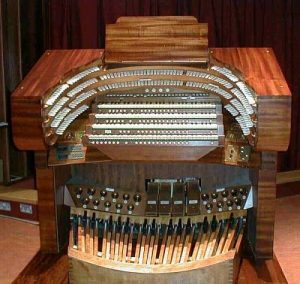 The organ was built in 1936 by Hill, Norman & Beard, as one of the firm’s Christie Unit Cinema Organs, for £8,800. The instrument was designed as a dual-purpose organ by Stanley Roper, Alfred Abdey, (then Borough Organist) and Quentin Maclean, who gave the opening recital.

The instrument became famous through the many broadcasts of Douglas Reeve in the heyday of the BBC Light Programme. His twice-weekly summer series of ‘Pack up Your Troubles’ organ concerts attracted capacity audiences. Just after the 2nd World War he also inaugurated the weekly ‘Tuesday Night at the Dome’ variety shows which were given an entry in the Guinness Book of Records as the longest running seaside variety show in the world.

In the year 2000, an extensive re-structuring of the Dome complex began and the organ was removed and taken to the organ building firm of David Wells of Liverpool, who look after many prestigious instruments. It was felt that, in addition to the cleaning and restoration of the instrument, tonal improvements would be beneficial. To improve the theatre organ side of the instrument two new ranks with a shared tremulant (Open Diapason and a Christie Flute) were added to the Accompaniment chamber. At the same time the layout of the entire organ was re-designed within new chambers.