Compton
3 Manuals
12 Ranks
Upright Pian
Originally installed in the Ritz/Essoldo Cinema, Tunbridge Wells in 1934 as a 3/7 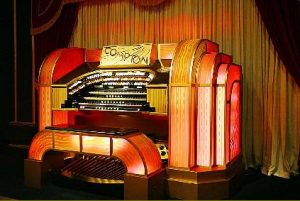 The Compton organ was formerly installed in the Ritz Cinema, Tunbridge Wells. The cinema was opened on December 3rd 1934 with the film ‘Sing As We Go’, starring Gracie Fields. A highlight of the programme was the organ interlude, given by Alex Taylor. Here the Compton remained, delighting audiences, until 1970 when it was removed to make way for a multi-screen complex and installed in the Regal, Henley on Thames.~

Nicholas Pitts bought the organ in the 90s and, together with a small army of helpers, brought the console and its 600 pipes back to Pinchbeck – just in time as, two days later, the cinema was demolished.

The concert organ is an amalgamation of parts of various organs, but its most notable paperwork is that from the Charterhouse School Chapel organ, built in 1872 by the German organ-builder Edmund Schultze.

In 1927 it was offered for sale and eventually purchased by Henry Willis, who incorporated the famous ‘Schultze’ pipework into the organ of Holy Trinity Church, St. Marylebone, London.