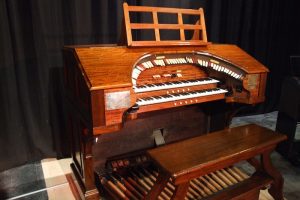 The Wurlitzer is a style D, Opus number 999 and was the second Wurlitzer to be shipped to the UK in 1925 and installed in the Palace Theatre in Tottenham, North London. The first public appearance of this organ was on 6th April 1925, with organist Jack Courtnay seated on the organ’s bench. The organ was very successful until the gradual demise of the cinema.

In the mid-1950’s the management of the Palace Cinema decided to dispose of the Wurlitzer as, at that time, many other organs were being removed from cinemas and broken up.

Fate then took a turn, as a Grammar School in Rye was looking for a pipe organ to install their newly built school hall. So, the Tottenham Wurlitzer was saved. The organ was transported to the school in Rye, where it was installed in a chamber at the rear of the balcony of the new school hall.

In 1993 the present society “Friends of Rye Wurlitzer” was formed by Richard Moore. Since then the organ has been used in regular concerts with many well-known organists at the console. The profits from all the concerts have been ploughed back into the many restoration projects that have taken place over the years. The organ has now been fitted with an electronic relay system. This has freed up much-needed space in the organ chamber, enabling the replacement of some missing percussion items.

The organ has now been returned to its specification of 1925, albeit with the addition of MIDI.

Its future at the school is now secure.