Christie
Originally installed in the Carlton cinema, Tuebrook, Liverpool. 1932 as a 3/10
3 Manuals
13 Ranks 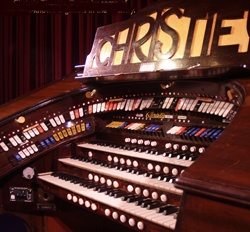 The Christie organ was originally installed in the Carlton, Tuebrook, Liverpool and opened on June 11th, 1932 with James Bell at the three manual, polished walnut console which controlled 9 units (10 ranks) of pipes.

In 1963 the organ was removed from the Carlton and installed in the ex. Servicemen’s Club, formerly the Regent cinema, Stotfold, replacing another Christie. A Krumet was added, followed later by an English Horn and Saxophone from the Ritz, Nottingham Conacher organ.
By 1984 the Social Club had decided to sell the Christie and permission was sought to demolish the Regent so the organ was offered for sale in 1986 and in 1987 it was moved to the Gordon Craig Theatre in Stevenage where it was professionally installed by Hill Norman & Beard who also carried out restoration work. It opened on September 27th, 1987.