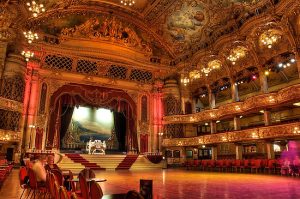 The star attraction of the Tower is the Ballroom, a monument to Victorian splendour, and the star of the Ballroom is undoubtedly the Mighty Wurlitzer. It rises from the centre of the stage and plays around 19,000 numbers a season. During the summer traditional tea dances are held allowing visitors to dance Ballroom and Latin.

In December 1956 a fire, started by a carelessly discarded cigarette end, caused severe damage to the Ballroom and the organ’s console. Luckily, the fire was put out before it reached the legs of the tower.

£5 million was spent renovating the ballroom to its original glory and, 18 months later, it was re-opened to the public, looking just as it did when first opened.

The organ was cleaned and renovated at the same time, and the console was re-built using replacement parts from London’s Gaumont, Holloway Wurlitzer, which had been removed from the theatre during World War 2.

Blackpool Tower is open from Easter to November, during the winter at weekends and during school holidays.

Phil Kelsall was appointed resident organist in 1977 and brought his own talent and expertise to this legendary venue. As the ‘main man’ at the tower, Phil adopted ‘I Do Like to Be Beside the Seaside’ as his signature tune, just as his famous predecessor Reginald Dixon did all those years ago.