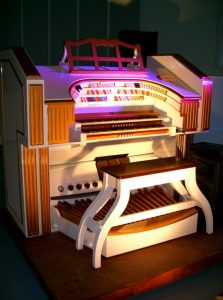 Bilston Town Hall was officially re-opened on Friday 19th September 2010 by The Right Worshipful the Mayor of Wolverhampton, Councillor Mrs Christine Mills. Prior to this, the Compton organ was played in its new home for the first time by Cameron Lloyd whilst champagne was served to the invited guests. Lord and Lady Turner of Bilston were also in attendance as well as several Council officials and past Mayors.

There is still a lot of work to do on the organ, particularly the Muted Trumpet and Tuba which had been ‘glued up’ a few years back at the Wellingborough School in an attempt to stop the pipes going out of tune…!