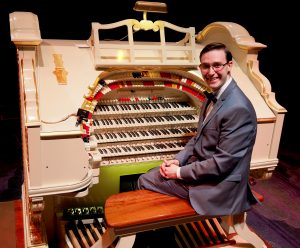 About Damon – “I first became interested in the cinema organ through a friend, and was initially totally submersed in the Blackpool sound. Slowly and through starting my Podcast ‘The Organist Encores’, I have broadened my horizons. The first major event of the COS I went to was the Troxy opening concert – I was totally blown away! Subsequently I moved to London and started helping out the Southern District not only at the Troxy but at Clayhall. I’m keen to see both instruments fall in the public eye, by using them with events run by other companies/organisations and to contact local interested parties (Music and Technical schools/colleges) to gain further interest. This will of course be while keeping up a spectacular concert bill – with a full advertising campaign and supporting new talent.”